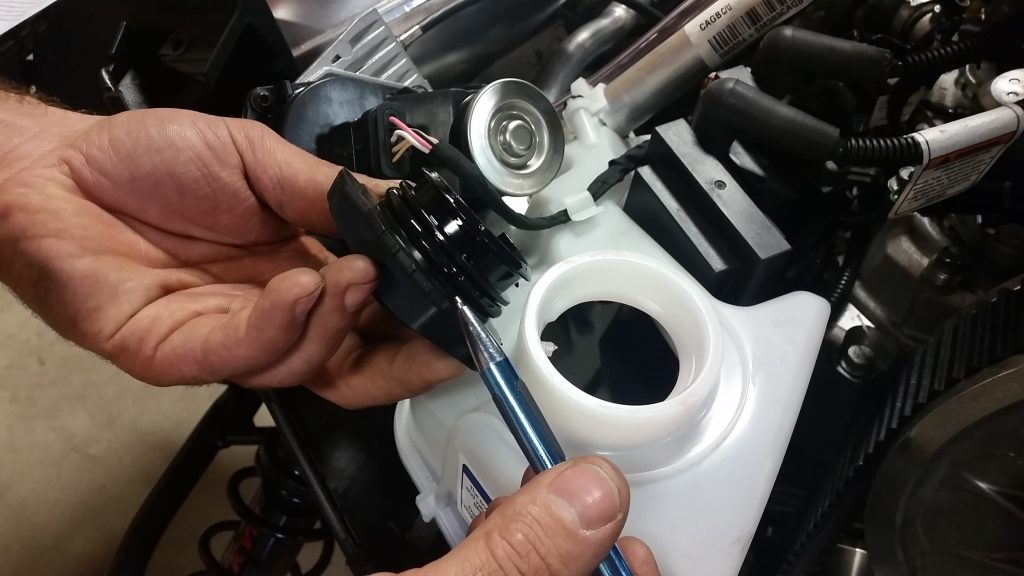 I heard a rumour that the motor was a 10,000 mile motor? What is the expected life span of this new motor?

It really depends on the lifestyle/usage of the machine. Whether it’s drag racing, trail riding, mountain riding, or what have you, Rotax has really pushed the bar as far as toughness, durability and performance. Done through simple and very effective engineering/design on how the oiling system works on the crankshaft. Big roller bearings on the PTO shaft, there’s no more grease in the bearings, it’s all pressurized oiling…. So it’s extremely effective and durable!

So, 10,000 is not a far fetched number under easy/moderate use, but if you are beating the snot out of it for every inch of its life… a more scheduled maintence program may be a good idea!

How do the new gauges work? What sort of Information is displayed and what is the layout like? (To be answered in detail in another blog!)

Every Ski-doo I’ve seen has an oil reservoir that leaked slightly, now that the oil tank is on top of the primary, has there been any problems so far with this set up?

The oil cap has a positive seal O-Ring inside the cap and has a tab which stops the cap from over tightening. It also has a little drip tray that drips down onto the belly pan area so unless you were splashing oil AT THE snowmobile rather than pouring in it, it most likely it’s going in the oil tank.

Is the throttle response THAT much different?

It makes a night and day difference. The clutch and crank are about 2.7 lbs lighter each. It has true 3 stage electronically controlled exhaust valves, which are extremely fast and accurate. It’s all balanced together with the secondary injection system on a shortened intake tract, allowing for a faster revving and smoother delivered throttle response. If you aren’t paying attention and you just blip the throttle, the sled will shoot out from underneath you. It lurches ahead. It’s the first thing anyone who rides it comments on. It’s just like a dirtbike, instant throttle response. One thing that I think is imperative to know is that while it is very crisp throttle response it is also very controllable eg: you can creep it out of a tight spot WITHOUT digging a big hole! The throttle response is directly related to your thumb…smack it/it goes, ease into it/it crawls.

I’d like an opinion on the track holes.  Will they disappear on the 18s?  How is the clutch setup?

In the old tracks in 2007+, the round holes let snow into the skid frame and it lost floatation/foot print. With these small slots, Ski-doo has tested and tested. Really there is no floatation loss whatsoever. It’s a small weight reduction but it’s important because it’s a lighter rotating mass. The holes are a different shape as well, long and thin as opposed to previous big round holes.

The clutch setup to creep out of the hole, but if you pin the throttle, it takes off right to 8000 rpm. Very crisp clutching.

Ski-doo has been on the warpath to sort this out and go back to real weights. They’re being really honest and forthcoming in what they’ve lost in weight. The dry weight is with oil in the shocks, chain case, coolant, very little oil in the oil tank, and little to no gas in the fuel tank. I wish all manufacters would use weights with full fuel and oil, all fluids being equal between brands……Starting my ride with an empty fuel/oil tank has never gotten me that far. lol

The 165hp figure for the 850 E-Tec was measured on Ski-doo’s dyno. On Ski-doo’s dyno the 800 was 155hp all though it has been advertised at 163.9hp. There was always an asterisk beside that figure specifying it was third party testing by Dyno Tech. So when the 850 hits Dyno Tech, it may or may not be higher than what Ski-doo rates it at.

I would like your honest input on the new 2017 Summit X. Do I have any reason to be concerned about the new powder lite track in the deep snow?

Other than some vague visual simalarities the new track has nothing in common with the old one on the 2007’s. We’ve tried ton’s of different track setups to get something better than the current T3, and this is the only design that’s better than that in every aspect. It makes a considerable difference in the powder and it’s still as good in the hardpack. But in the powder it’s definitely a noticeable difference. Not to mention the track is 10 lbs lighter and it’s also rotating mass, and that helps with throttle response too because it’s lighter so it spins faster.

Is the new 850 E-Tec with it’s new injectors the same technology that’s in the Evinrude’s E-Tec 2 technology?

I’m not familiar with the Evinrudes, but the new E-Tec 850 does have a revised E-tec injector, it’s lighter, more efficient and precise than what we’ve had in the 800 E-Tec. This is the latest 2-stroke technology there is. There is never a “it’s good enough” attiude amoung the rotax/brp people and they are constantly refining or inventing.

The new cooling exchanger appears to have a larger surface area than the XM, how efficiently does the Rev4 run at, with respect to engine temperatures while headed up the trail, compared to the XM?

This cooler is far more efficient than any of the other coolers we’ve had and it adds strength to the tunnel as well as being lighter weight. It has a great heat transfer and is slightly better than the XM, but if you are running super hard pack/solid ice on the trails scratchers will be necessary.

Is the riders foot position, when in the pocket, further forward or backwards from the XM?

When it’s up against the stirrup, it’s more forward than the XM. You can move about 2-3 inches further forward than on the XM, plus the 165 is 2 inches longer than the 163. You can buy toe hooks in several variations from the Ski-doo PAC catalog. I find that its almost 50/50 for people who want/use the toe hold. At least now you have more choices.

The riser appears to be taller on the Rev4 vs XM. How tall is the riser/bar assembly compared to the XM and does this play into rider stance?

In photographs, the bar rise may appear significantly higher due to the new lower design of the gauge cluster. But the handlebars remain within a ¼” of the comparable XM in height, given diferrent style of riser/ bar combinations. I prefer an inch or even 2 inches lower just for aggressive riding and better sled control in a wider variety of areas. The 4th Gen Rev sleds, XM’s, XP’s and even the Rev before that, I’ve also ran lower bars for mountains, snocross and trail applications. So talk to your dealer and remember your power/balance is at your belt line with bent knees. So you should be riding with slightly bent knees, and when you’re in that position, the handlebars should be very close to your belt line.

Have a look below for a couple more videos on our Instagram under the hood. Follow us for more information and great inspiration for your riding season.